Wombat Creek is a H0 (1:87) scale model of a fictional town situated somewhere in the Victorian Goldfields, Australia.

The time is 1963. Geelong wins the VFL Championship against Hawthorn (109– 60). John F. Kennedy is assassinated in Dallas. ValentinaTeresjkova is the first woman in Space. The men behind The Great Train Robbery get £2.6 million from a Royal Mail train heading from Glasgow to London.

The town consists of several buildings. The “Wombat Creek Bank and Gold Exchange” is a prominent building in the town centre. You will also find several other commercial buildings; among them the daily newspaper“W.C. Chronicle”(colloquial known as the "Toilet Paper") and “Wombat Creek Brewing Company” (Famous for the “Wombat Bitter”). “The Big Nugget Gold Mine” is situated at the Western outskirts of town near the small Chinatown. The War Memorial is in a small park along East Street.

The town’s mayor Alfred Campbell together with his son David Campbell owns several businesses, including the bank, the pub and the newspaper. AC/DC basically run the town and make most decisions on behalf of the rest of Wombat Creek’s residents, who, on the other hand, are too busy with their own businesses.

The mayor’s latest initiative is Wombat Creek Tramways. Wombat Creek doesn’t really need a tram system, but AC reckons tramways will improve the town’s reputation. Partly because of limited funds the tramways' construction and rolling stock depend heavily on second-hand requirements from other Australian and overseas tramways.

The
‘Mug Punter Hotel’ next to the entrance to the Racecourse is now open
for business. Only a few details are missing (e.g. steps near the
doors). The building itself is modelled after a small hotel/pub in
the“Flagstaff
Hill Maritime Museum and Village”, Warrnambool. Because the
original hotel is quite small the model has been extended with an
extra set of windows to the left and right of the main entrance. The
back of the hotel is not modelled after the one in Warrnambool but
designed to fit the space on the lay-out.

The
model is made out of cardboard covered with ‘Semi rough cut grit/sand
stone’ from Metcalfe. The tiles on the roof is also from Metcalfe.
Windows are cut from thin plastic sheet. The signs and the banner are
made in Photoshop and printed on 300 gr. paper. 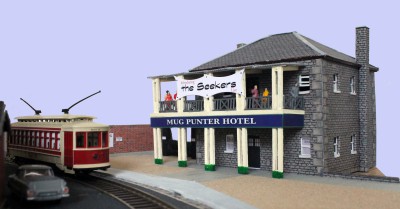 The
lay-out of ‘Wombat Creek Tramways’ is set in year 1963 – the year
the Seekers produced their first album ‘Introducing
the Seekers’, so tonight’s concert is really a scoop for the ‘Mug
Punter’. The audience is quite big so some have gone to the veranda
for some fresh air – even with the first floor windows all open.